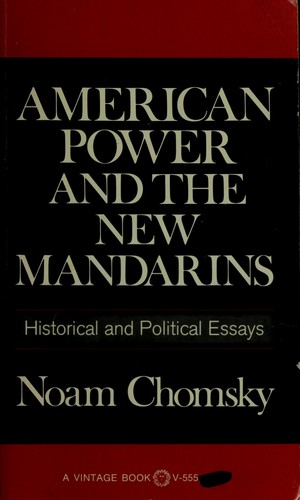 I decided to download a torrent of Noam Chomsky books because I had been hearing his name mentioned in the political conversations of authors and artists whose work I respect and admire.
I was mostly inspired by the episode of The Green Room with Paul Provenza with Richard Belzer, Janeane Garofalo, Dave Attell, Doug Stanhope and Glen Wool.
During the episode, Doug Stanhope confronted Janeane Garofalo with an anecdote about attending her first show after 9/11 where he remembered Janeane saying that “Noam Chomsky and Howard Zinn should just shut up.”
Janeane, understandably took umbrage to the anecdote and conflict ensued.
To diffuse the tension, Dave Attell said, “What’s going on with this program it’s been over a minute since someone said Noam Chomsky. How are we going to make the cover of Yawn Monthly?”
I’ve watched the two seasons of The Green Room over and over again because they’re nice light viewing to throw on in the background while you’re doing something else.
So, from my love of stand-up comedy and the comedians that do it, the name Noam Chomsky finally stuck in my brain.
I searched The Pirate Bay for Noam Chomsky and found a torrent for 60 of his books.
https://thepiratebay.se/torrent/10476891/Noam_Chomsky_-_60_Books_PDF
There was also a torrent of 26 audio books which I am downloading as I type this.
I went for the PDF collection first because I’m always fighting for space on the hard drive on my laptop, and 983.69 Megs was significantly less space than 5 Gigs.
But I have an external drive where I archive stuff that I’m not actively using and having read my first Noam Chomsky book, I decided that the audio books were worth the time and effort and disk space to download.
Also, for those of you that prefer videos, you can watch the documentary Manufacturing Consent - Noam Chomsky and the Media here: https://youtu.be/Tbbfr9OJTfY

The PDF archive contained the following titles:
[1969] American Power And The New Mandarins
[1970] Anarchism - From Theory To Practice-With An Introduction By Noam Chomsky (Daniel Guérin)
[1972] The Pentagon Papers - Volume 5 - Critical Essays (Various Authors)
[1973] Counter-Revolutionary Violence - Bloodbaths In Fact And Propaganda
[1979] After The Cataclysm - Postwar Indochina & The Reconstruction Of Imperial Ideology (with Edward S. Herman)
[1985] Turning The Tide - U.S. Intervention In Central America And The Struggle For Peace
[1987] On Power And Ideology - The Managua Lectures
[1987] The Chomsky Reader
[1988] Manufacturing Consent - The Political Economy Of The Mass Media (with Edward S. Herman)
[1988] The Culture Of Terrorism
[1989] Necessary Illusions - Thought Control In Democratic Societies
[1991] Deterring Democracy
[1991] Terrorizing The Neighborhood - American Foreign Policy In The Post-Cold War Era
[1992] Chronicles Of Dissent - Noam Chomsky In Conversation 1984-1991 - Interviewed By David Barsamian
[1992] Stenographers To Power - Media & Propaganda - Interviews By David Barsamian (Noam Chomsky, etc.)
[1992] What Uncle Sam Really Wants
[1993] Rethinking Camelot - JFK, The Vietnam War, And U.S. Political Culture
[1993] The Prosperous Few And The Restless Many
[1993] Year 501 - The Conquest Continues
[1994] Keeping The Rabble In Line - Interviews With David Barsamian
[1994] Manufacturing Consent - Noam Chomsky And The Media -The Companion Book To The Award-Winning Film
[1994] Secrets, Lies And Democracy - Interviewed By David Barsamian
[1994] World Orders, Old And New
[1996] Powers & Prospects - Reflections On Human Nature And The Social Order
[1997, 2002] Media Control - The Spectacular Achievements Of Propaganda
[1997] Class Warfare - Interviews With David Barsamian
[1997] The Cold War & The University - Toward An Intellectual History Of The Postwar Years (Various Authors)
[1998] Talking About A Revolution - Interviews With Noam Chomsky, etc.
[1998] The Common Good - Interviewed By David Barsamian
[1999]  The New Military Humanism - Lessons From Kosovo
[1999] Fateful Triangle - The United States, Israel & The Palestinians
[1999] Profit Over People - Neoliberalism And Global Order
[2000] A New Generation Draws The Line - Kosovo, East Timor And The Standards Of The West
[2000] Rogue States - The Rule Of Force In World Affairs
[2001] 9-11
[2001] Propaganda And The Public Mind - Conversations With Noam Chomsky-Interviews By David Barsamian
[2001] You Are Being Lied To (Various Authors)
[2002] Pirates And Emperors, Old And New - International Terrorism In The Real World
[2002] Understanding Power - The Indispensable Chomsky
[2003] Hegemony Or Survival - America's Quest For Global Dominance
[2003] Middle East Illusions
[2003] Power And Terror - Post-9-11 Talks And Interviews
[2005] Conversations On The Edge Of The Apocalypse - Contemplating The Future With Noam Chomsky, etc.
[2005] Government In The Future
[2005] Imperial Ambitions - Conversations With Noam Chomsky On The Post-9-11 World-Interviews With David Barsamian
[2005] The Kurds In Turkey - EU Accession And Human Rights (Kerim Yildiz-Foreword By Noam Chomsky)
[2006] Failed States - The Abuse Of Power And The Assault On Democracy
[2006] The Chomsky-Foucault Debate - On Human Nature
[2007] Interventions
[2007] What We Say Goes - Conversations On U.S. Power In A Changing World-With David Barsamian
[2008] The Essential Chomsky
[2010] Gaza In Crisis - Reflections On Israel's War Against The Palestinians (with Ilan Pappé)
[2010] Hopes And Prospects
[2011] How The World Works - Interviewed By David Barsamian
[2012] Making The Future - Occupations, Interventions, Empire And Resistance
[2012] Occupy
[2013] Nuclear War And Environmental Catastrophe (with Laray Polk)
[2013] On Anarchism
[2013] On Western Terrorism - From Hiroshima To Drone Warfare (with Andre Vltchek)
[2013] Power Systems - Conversations On Global Democratic Uprisings And The New Challenges To U.S. Empire-Interviews With David Barsamian
I decided to dive right in and start from the beginning and approach the titles chronologically which is how I found myself reading American Power And The New Mandarins [1969].
You may be wondering why I'm reading/reviewing a book from almost six decades ago.
As George Santayan said, " Those who cannot remember the past are condemned to repeat it.”
I have always found history interesting, but the immensity of human history that precedes my existence has always been intimidating.
It’s difficult to wrap your mind around history as it is difficult to define.
In theory, either an event occurred or it did not occur.
In school, history is presented in textbooks which are filtered through the bas of the authors and editors and publishers of the history books.
As an American, I was taught that the “founding fathers” were worthy of worship and communism is evil.
Questioning the history as given was not encouraged.
I remember when I was in college, I was asked to write a paper on a historical revolution.
I decided to take the approach that many revolutions are inspired by similar situations, like unequal distribution of wealth and resources and the centralization and exclusion of political power.
I got a D.
I ended up dropping the class because I knew that what I felt was true, even if I didn’t have the maturity and wisdom to justify my position, and I was of the opinion that although the professor might know a fair amount about history, she might also be an idiot, the two not being mutually exclusive.

American Power And The New Mandarins contains an Introduction, Eight Essays, and an Epilogue and focuses on the Vietnam War.
The essays, which provide what was probably a very unpopular perspective, are still well worth reading, especially concerning the details of the conflict that have surfaced since the book was published.
See: The Gulf Of Tonkin Incident
https://en.wikipedia.org/wiki/Gulf_of_Tonkin_incident
While reading this book, I found it difficult to not read it as an analogy of our current activities in the "middle east".
All you have to do is replace “communism” with “muslim extremism” and “Vietnam” with “Iraq” or “Afghanistan” or whatever country we’re currently occupying.
When we “began” our conflict in the “middle east” in 1992, I was fourteen, in eighth grade, and I felt an intuitive opposition to the American military invading a foreign country.
I wasn’t sophisticated enough to understand or explain this intuitive opposition, but I expressed my opposition when the opportunity presented itself.
As I aged, I continued to read and watch and learn and twenty-four years later the American military continues to occupy and engage in violence in the “middle east”.
The discretionary budget of the United States for 2015 was 1.1 Trillion. 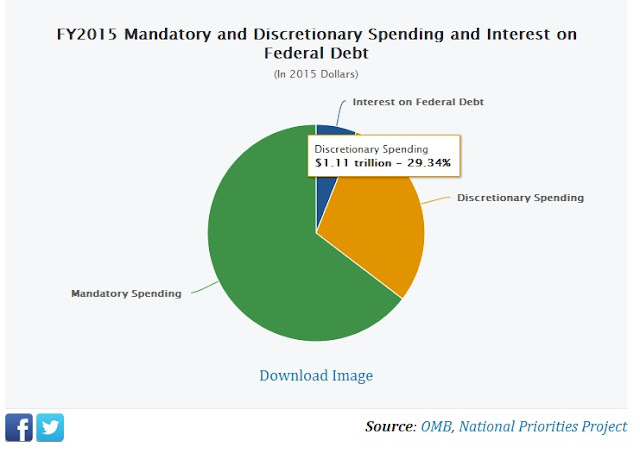 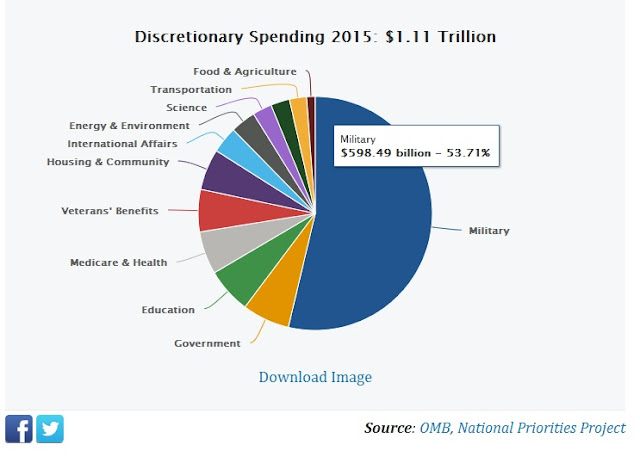 Source: https://www.nationalpriorities.org/budget-basics/federal-budget-101/spending/
The cost of the war in the middle east is estimated at between $400 Billion and $1 Trillion, or even as much as between $4 Trillion and $6 Trillion.
Sources:
https://en.wikipedia.org/wiki/Cost_of_conflict
https://www.washingtonpost.com/world/national-security/study-iraq-afghan-war-costs-to-top-4-trillion/2013/03/28/b82a5dce-97ed-11e2-814b-063623d80a60_story.html

I am of the opinion that this expenditure would have been better spent on developing our domestic infrastructure and paying down the national debt.
But since this is supposed to be a book review and not an op ed piece, I will refrain from further digression.

Some of the selections from American Power And The New Mandarins that I found of particular interest are as follows:
“The underlying assumption is that the United States does have a warrant "to take upon itself to prescribe what shall be the terms and conditions of a 'new order' in areas not under its sovereignty and to constitute itself the repository of authority and the agent of destiny in regard thereto."
“Every competent observer has pointed out that "the war in South Vietnam has been between the large, professionally trained army of an unpopular government and the amateur military wing of a strong, nationalistically based political movement in which the Communists have formed the spearhead"
And, lastly, and of enduring interest is the following:
“We can ask whose "interest" is served by 100,000 casualties and 100 billion dollars expended in the attempt to subjugate a small country halfway around the world.”
Posted by Scott Lefebvre at 1:32 AM